Ellie Murphy was elected to the new Welsh Youth Parliament by over 60 young Gypsy, Roma and Travellers in elections held by Travelling Ahead last Autumn, and in January she attended her first Youth Parliament meeting for the Mid and West Wales region. You can see Ellie’s Youth Parliament profile here and here’s what’s she had to say about her new role:

I decided to apply to be a Welsh Youth Parliament Member so I could be the voice of young Gypsy Travellers across Wales.

Being a teenage Gypsy Traveller myself, I am aware of the issues concerning my community and decided that Education, Accommodation and Health and Well Being were the most important. I was successful in my applications and was voted in by other young Gypsy Travellers and am the TGP partner member.

On Saturday 19th January I had my first meeting with the other regional members in Carmarthen. The day was spent getting to know each other, learning the rules and what is expected of me. I have my first residential weekend starting on the 22nd February, where I will meet all the WYP members at the Senedd.

I have also been a member of Pembrokeshire Youth Forum so I will be able to feedback to them every month. 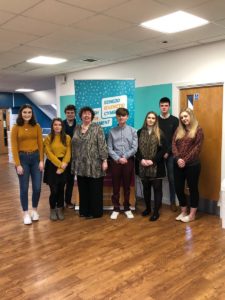